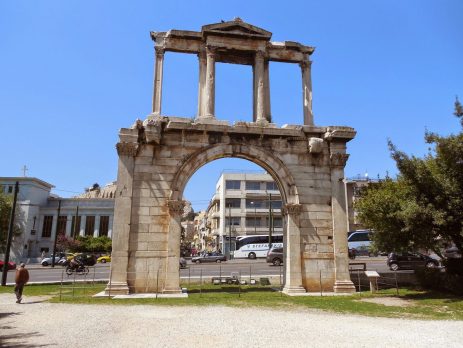 Hadrian’s Gate is a monumental gate that looks to some terms with a Roman triumphal arch.

Expands an ancient road from the center of Athens by katoikoion complex on the east side of the city symperilamvanontas the temple of Zeus God.

It has been suggested that the arch was built to celebrate the coming of the Roman Emperor Hadrian and to honor him for his benefactions to the city, the devotion to nearby bands 131 to 132 AD Not sure Pius igouse the arch, although probably the inhabitants of Athens to other Greek city understand the design and construction.

There were two inscriptions on the apse looking on opposite sides so named and slo founders of Athens, Theseus and Hadrian. Although it is clear that the inscriptions respect Hadrian, it is uncertain whether out in the city throughout the city in two parts, old and new.

The early notion that the arch branded line the ancient walls and thus the distinction between old and new city proved wrong after periterou excavations. The arch is located 325m. southeast of the Acropolis.